Why are some countries rich and others poor? This is one of the most important questions in economics.

In the medieval period, Europe was a backwater. But by around 1500, it was already growing faster than other continents, in what historians call the “Great Divergence”. This was mainly because northwest Europe began to outperform southern, central and eastern Europe – the so-called “Little Divergence”. The Low Countries – what are now Belgium, Luxembourg and the Netherlands – experienced stunning economic growth from around 1450 to around 1700. But around 1650, England started growing faster than the rest of northwest Europe. Then, in 1760, England launched the Industrial Revolution and took off into sustained growth – the first economy on the planet to do so. 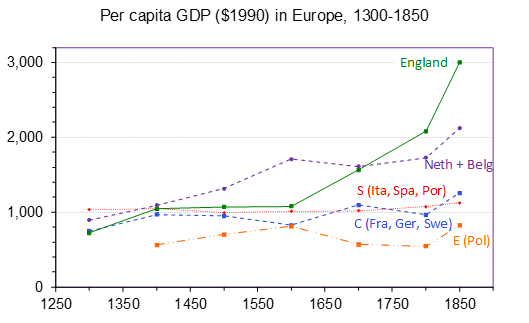 What caused this economic divergence? One important set of explanations focuses on institutions – “the humanly devised constraints that structure political, economic, and social interaction”, in Doug North’s famous definition. One nice thing about institutions is that they are humanly devised. So they imply that policy matters. Many economists now think that if we can pinpoint the institutions that caused the northwest European economic miracle, we can trigger economic growth in modern poor regions, maybe even whole societies. We can make history repeat itself.

But any historical explanation has to do at least three things:

There is an institutional explanation for why the Industrial Revolution happened first in England. However, it doesn’t involve looking at particular institutions – state capacity, parliament, the family system – in isolation. Instead, it resides in the whole institutional framework – a variegated system of institutions that checked each other’s abuses.

What was this interconnected, growth-friendly institutional system? It had three key elements:

The key to growth was thus no single institution in isolation. Rather, it was a combination of strong governments, strong markets, and a strong civil society. Each component depended on the other two. Each institution also depended on an interconnected web of other institutions that held it in place and checked the inherent vulnerability of any given institution to corruption and abuse by the powerful.

The lesson for growth? Institutions matter. But they matter as systems. So they are hard to transplant. And there are no magic bullets. It is tough to repeat history, especially the good bits. But we can design better policies if we understand why history is so hard to repeat.

See here for a longer version of this article.